The History of Upholstery

Unless you work specifically in the field, upholstery in all its forms is something we rarely think about but it impacts our lives on a daily basis. We slump on sofas, perch on stools and lean on armchairs without a thought about the fabric on which we’re sitting.

Upholstery has been covering our furniture, at least how we recognise it today, for over 500 years. In fact, depending on how you define ‘upholstery’,  you could trace some aspects of it back to the Middle Ages and even back to ancient Egypt. We’ve come a long way to today’s scatter cushions and reclining chairs. In the earliest examples, animal skins, goose down and horsehair were the starting blocks of the upholstery revolution.

The earliest examples of people requiring more comfort from their ‘furniture’ involved cushions stuffed with horsehair strewn across daybeds and fabrics draped, not over windows, but thrones.

The Beginnings of UK Upholstery

In the UK at least, as we moved from the Dark Ages into a relatively more civilised society, people began to care more about what the inside of their homes looked like. As the threats to their lives and property eased, they started to have more pride in their living spaces focussing more on comfort rather than just function. Uncomfortable chairs made from oak started to have cushions on them. That said, the cushions at that time only existed on the seat and not the back of the chair.

As the skills of craftsmen around the world began to develop and the quantity and quality of the available fabric blossomed, so did the items the artisans of the time were able to make became more useful. Italy were making some of the finest silks and those skills were soon being repurposed across Europe. Weavers were soon making tapestries to hang on walls, over beds and cushions, although most were still only available to the wealthy. 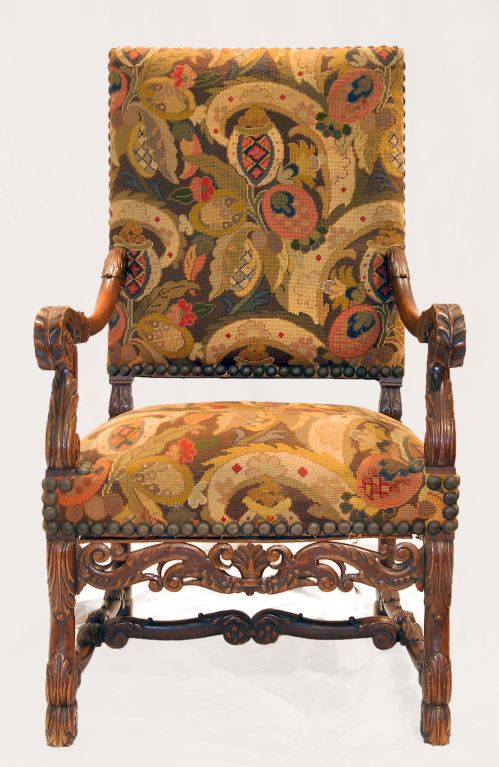 As the country moved into the Elizabethan era, furniture was becoming much more comfortable. Heavy fabrics, what we’d call curtains, were being draped around beds (especially four-poster). They were designed more to stop draft than anything else but they still were quite intricate.

Windows weren’t missed out from this trend. Tall windows began to display headings, swags and tails of fabrics, often trimmed with wooden cornices which were equally intricate. Because of their passion for large, wide Elizabethan dresses, the furniture had to change to accommodate it. As such the farthingale chair was created. This was a chair without arms that had fabric stretched across the back and nailed on the side. The upholstery was made from leather or embroidered fabric with velvet trim. It certainly looked the part, however the padding was often made from sawdust, grass or animal hair. None of which are known for their comfort factor.

As the country began to develop, upholstery was often the poor cousin of innovation. Rather than undergoing constant development it was all too often discarded once it became uncomfortable, which didn’t take very long. It was countries like Spain and Turkey that were leading the way. Spain had incredible decorative leather and Turkey was the king of divans; low sofas covered in colourful tapestries and comfortable cushions.

As the puritanical regimes died away in England, furniture and its upholstery began to flourish. The very first fully upholstered chair was made in 1705. It was referred to as a ‘sleeping chayre’. As the popularity grew, factories were popping up all over the country using silk, wool, leather and embroidery to create stunning fabrics that continued into the next century.

Fast forward to today and we are spoiled for choice when it comes to design, fabric and styles. Technological advancements have created man-made fabrics like Nylon and plastics, like fibre-glass and foam that are used to create countless styles of furniture. Upholstery really has advanced through the ages.

We hope that you find the information presented useful. If you wish to discuss anything about any of our products then feel free to contact us or call us on 01604 875062

This entry was posted in Articles. Bookmark the permalink.